Spanish government greenlights the increase in pensions for 2022

Likewise, a compensatory payment (la paguilla) has been approved for pensioners for the inflation deviation that occurred last year

The Spanish Council of Ministers approved on Tuesday the revaluation of pensions for the year 2022.

Likewise, a compensatory payment (la paguilla) has been approved for pensioners for the inflation deviation that occurred last year.

The Minister of Inclusion, Social Security and Migration, José Luis Escrivá, explained that the Government allocates 6,500 million euros to this revaluation and that 11.5 million pensioners will benefit "who will be able to maintain their purchasing power." The pension increase takes effect from 1 January 2022.

According to a government statement, the 2.5% increase approved for contributory pensions in 2022 corresponds to the average inflation of the last twelve months until November 2021. 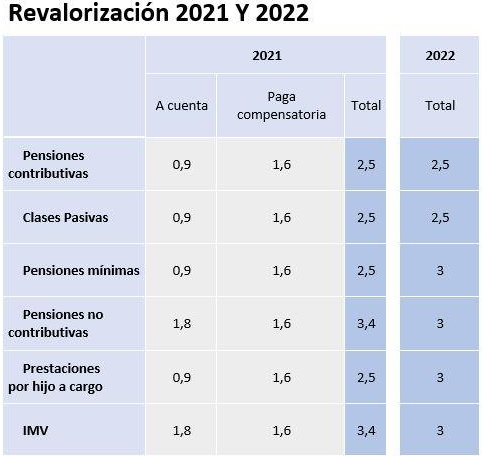 For its part, the compensatory payment has been approved because inflation, between January and November 2021, it exceeded the projection with which pensions were revalued in that year (0.9% was projected and inflation was 2.5%).

Minister Escriva stated that the new pension framework offers "absolute certainty" to pensioners and guarantees their purchasing power "indefinitely and at all times" compared to the previous system "which emphasized cuts and austerity."

Spain Pension Increase 2022 Spanish pensions
Today news
1
Spain sends another plane with supplies to Ukraine
2
Finnair to cut 200 jobs and operate "with a smaller capacity"
3
Social Security to "immediately" hire 1,615 workers to improve service
4
Spain lowers VAT on menstrual hygiene products, condoms from 10% to 4%
5
Spain to cut income tax for workers who earn up to € 21,000