Retail sales increase in Madrid and in the main tourist regions

The partial recovery of the tourism may be behind the positive development registered by the retail trade sector in the capital and in the main coastal destinations
Creation of companies grows strongly in Spain, latest data show
Self-employed activities monitored by Spanish Treasury due to cash use
Spain allocates €10 million to attracting European women entrepreneurs
The Nomad Today
October 2, 2021 at 10:14 AM
The Nomad Today
October 2, 2021 at 10:14 AM

Retail sales in the whole of Spain fell by an average of -0.1% in August (-0.9%, once adjusted for seasonal and calendar effects), according to data published by the Spanish statistical office (INE).

However, the INE data show an uneven evolution in the different regions of the country.

The partial recovery of the tourism sector may be among the causes of the positive development registered in the capital and in the main coastal destinations.

The data show that the retail sector improved its sales in the 6 autonomous communities (regions) with the highest influx of tourists, including the archipelagos of the Balearic Islands (7.3%) and the Canary Islands (0.3%), but decreased in another 11 regions. 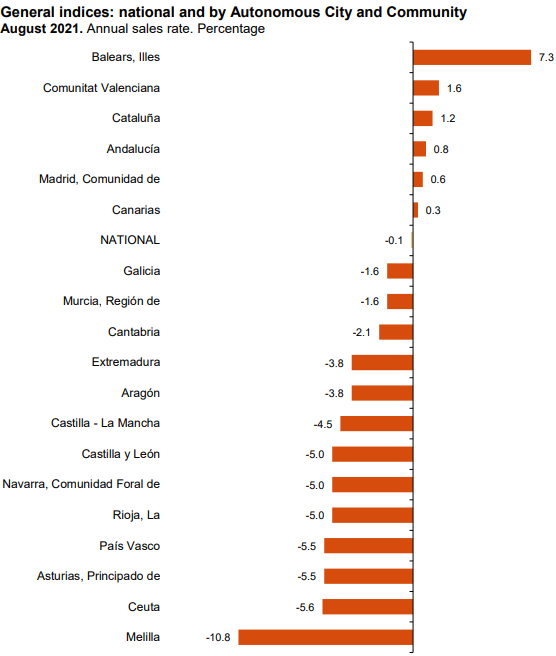 Employment in the retail sector

In August, employment in the retail sector increased throughout Spain by 1.8% compared to the same month in 2020.

The Balearic Islands registered the highest increase (3.5%), followed by the Valencian Community (3.2%).