Spain, ninth country in the EU with the highest rate of smokers

In Spain, as in most EU countries except Sweden and Denmark, the proportion of smokers is higher among men than among women
Spain approves draft law for equality of transgender, LGBTI people
These are the most popular names for newborns in Spain
Spain swelters as France braces for pre-summer heatwave to hit
The Nomad Today
November 16, 2021 at 1:51 PM
The Nomad Today
November 16, 2021 at 1:51 PM

Spain is the ninth country in the EU with the highest rate of smokers, according to the latest figures published by the European statistical office (Eurostat).

Ahead of Spain are Bulgaria, Greece, Latvia, Germany, Croatia, Cyprus, Slovakia and Austria in the ranking of countries with the most smokers. 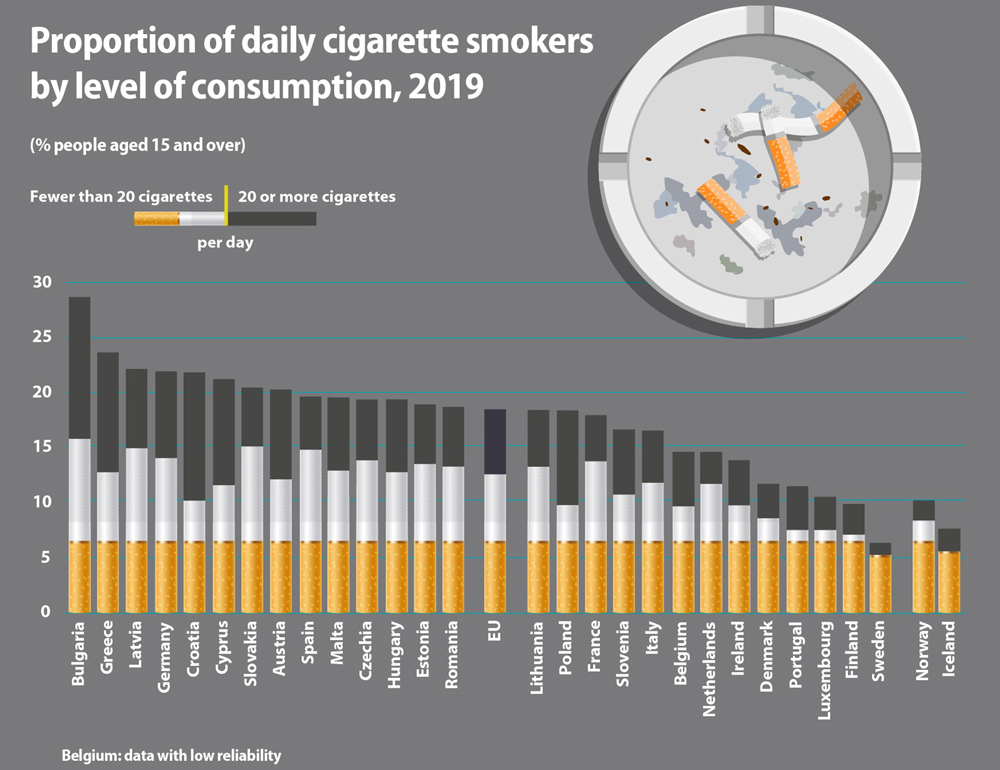 According to Eurostat, in 2019 - the last year for which there are comparable figures for the whole of Europe - 19.7% of Spaniards over 15 years of age reported that they were daily cigarette smokers.

In fact, 14.8% of the Spanish population consumed fewer than 20 cigarettes per day, while 4.9% consumed 20 or more cigarettes on a daily basis.

In Spain, as in most EU countries except Sweden and Denmark, the proportion of smokers is higher among men than among women. 23.2% of Spanish men smoke daily, compared to 16.4% of Spanish women, according to Eurostat data.

In 2019, there were more smokers among the male population than the female population in the EU: 22.3% of European men aged 15 years old and over were daily cigarette smokers, compared with 14.8% of women.

In all EU Member States, the proportion of daily cigarette smokers was higher among men than among women, apart from in Sweden and Denmark.

Rate Spain Smoke Smoking percentage smokers
Today news
1
Finnair to cut 200 jobs and operate "with a smaller capacity"
2
Social Security to "immediately" hire 1,615 workers to improve service
3
Spain lowers VAT on menstrual hygiene products, condoms from 10% to 4%
4
Spain to cut income tax for workers who earn up to € 21,000
5
September inflation in Spain moderates and falls to 9%

The most
Spain, ninth country in the EU with the highest rate of smokers
Comments