Nations ring in 2022 with muted celebrations due to the pandemic

Many parties and fireworks displays were cancelled, for example in London and Paris, or scaled down, like in Madrid
Adele postpones Las Vegas residency due to delivery delays and Covid
French actor Gaspard Ulliel dies after skiing accident
World's oldest man dies in Spain aged 112
Spanish star architect Ricardo Bofill dead at 82
The Nomad Today/dpa
January 1, 2022 at 11:18 AM
The Nomad Today/dpa
January 1, 2022 at 11:18 AM

Successive countries are marking the coming of the year 2022, with many holding muted celebrations amid the coronavirus pandemic.

Celebrations were under way in Europe, where despite unseasonably mild weather, many large parties and fireworks displays were cancelled, for example in London and Paris, or scaled down, like in Madrid.

In Berlin, there were no big fireworks display at the Brandenburg Gate and no party with hundreds of thousands of people, and just before midnight Berlin police called on people not to head to the landmark.

Crowds that flocked to the area before midnight started dissolving in the early hours of Saturday, police said.

Meanwhile, public broadcaster ZDF offered a live show with singers like Bonnie Tyler and Marianne Rosenberg but no spectators.

In Rome, Italian police closed off some areas in the centre of the city after fireworks were thrown at passer-bys near the Colosseum metro station, ANSA news agency reported, adding that no injuries were initially reported. 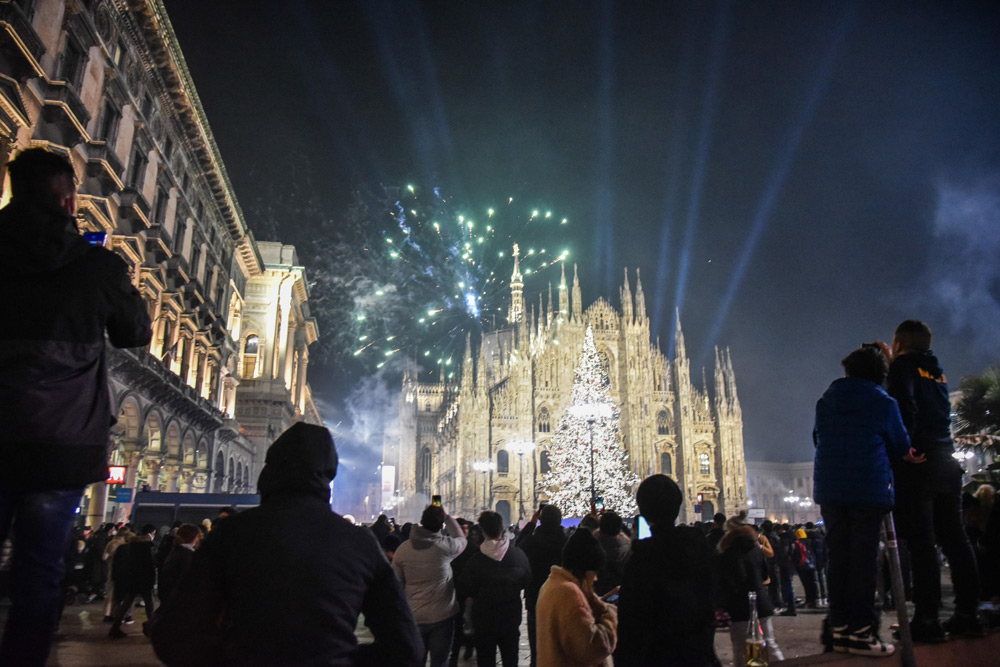 France welcomed the year with strict Covid-19 measures. The traditional New Year's Eve fireworks on the Parisian Arc de Triomphe were cancelled, while toasting with sparkling wine on the Champs-Élysées was not allowed.

In Paris and in many parts of the country, alcohol was banned on the streets around the turn of the year. Even so, a large crowd gathered on the Champs-Élysées. Only a few fireworks went off in the Parisian sky as their sale was banned almost everywhere in France before New Year's Eve.

In a number of areas, including Paris, bars and restaurants had to close at 2 am on Saturday. In many French cities mask mandates were in place even outdoors. In Strasbourg and the surrounding area, authorities imposed a curfew on unaccompanied people under the age of 16 due to serious disorders in the past.

Interior Minister Gérald Darmanin said that more than 95,000 police officers and gendarmes were mobilized on New Year's Eve to ensure compliance with the rules. 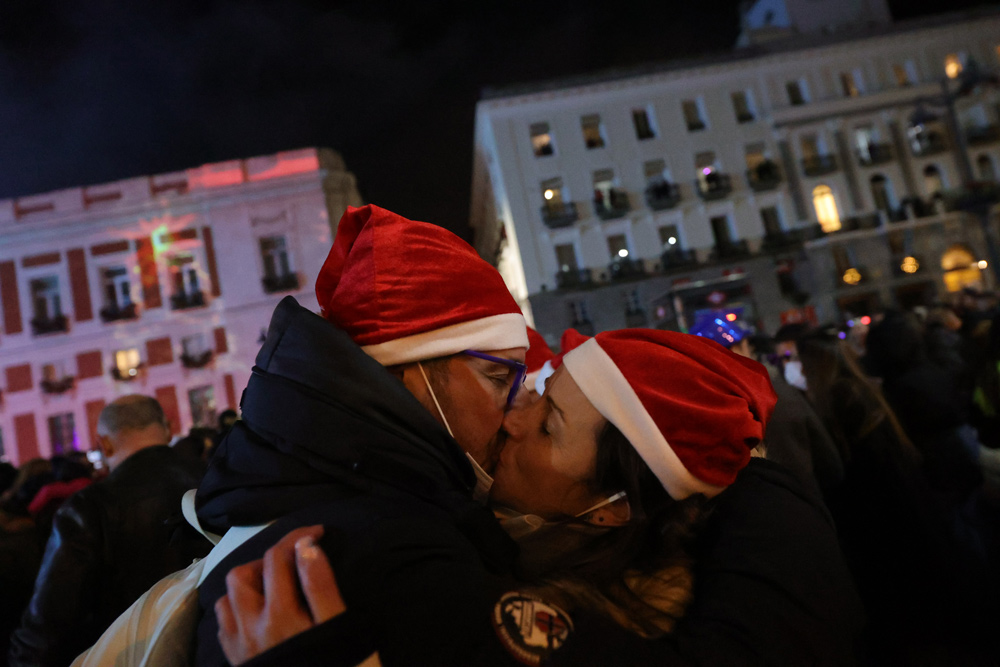 Two people kiss each other during the celebration at Puerta del Sol. Photo: Jesús Hellín/dpa.

Despite the rapidly increasing number of coronavirus infections, the most traditional New Year's Eve mass party in Spain took place again in Madrid after being called off last year.

Around 7,000 people welcomed the new year at Madrid's Puerta del Sol square, the number of participants allowed reduced by around 60 per cent.

Otherwise there were no significant restrictions in the Spanish capital.

People around the country ate the traditional 12 grapes at each stroke of the clock at Puerta del Sol plaza at midnight for good luck.

Millions of people in Moscow celebrated the New Year in freezing temperatures with fireworks in several places and no major coronavirus restrictions.

Thousands gathered at Moscow's famous Red Square, where the clock at the Kremlin struck 12 times to welcome the year 2022.

The Russian capital traditionally organizes fireworks in several places, best seen from the skyscraper district of Moskva City or from the Sparrow Hills. 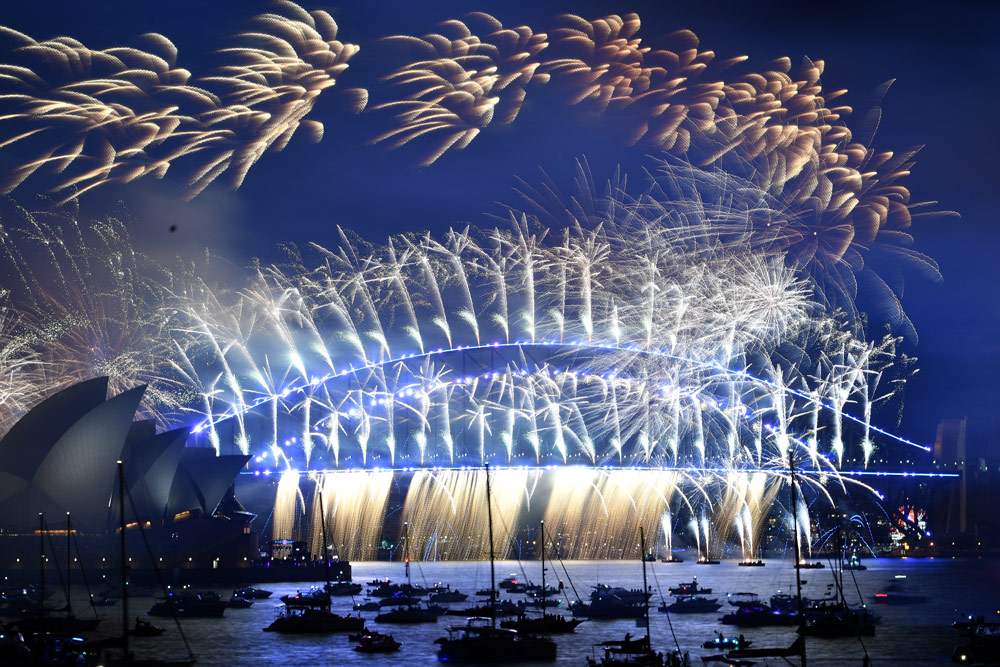 The midnight fireworks go off over the Sydney Opera House and Sydney Harbour Bridge during the New Year’s celebrations. Photo: Dean Lewins/dpa.

The new year began first for the inhabitants of the South Pacific islands of Samoa and Kiribati, who saw in the new year at 1000 GMT, and New Zealand following one hour later.

Fireworks were allowed in Samoa this year, unlike last year when bans applied.

In Australia, Sydney kicked off 2022 with 6 tons of colourful fireworks against the imposing backdrop of the Harbour Bridge and Opera House, at a display ticket holders were able to attend. 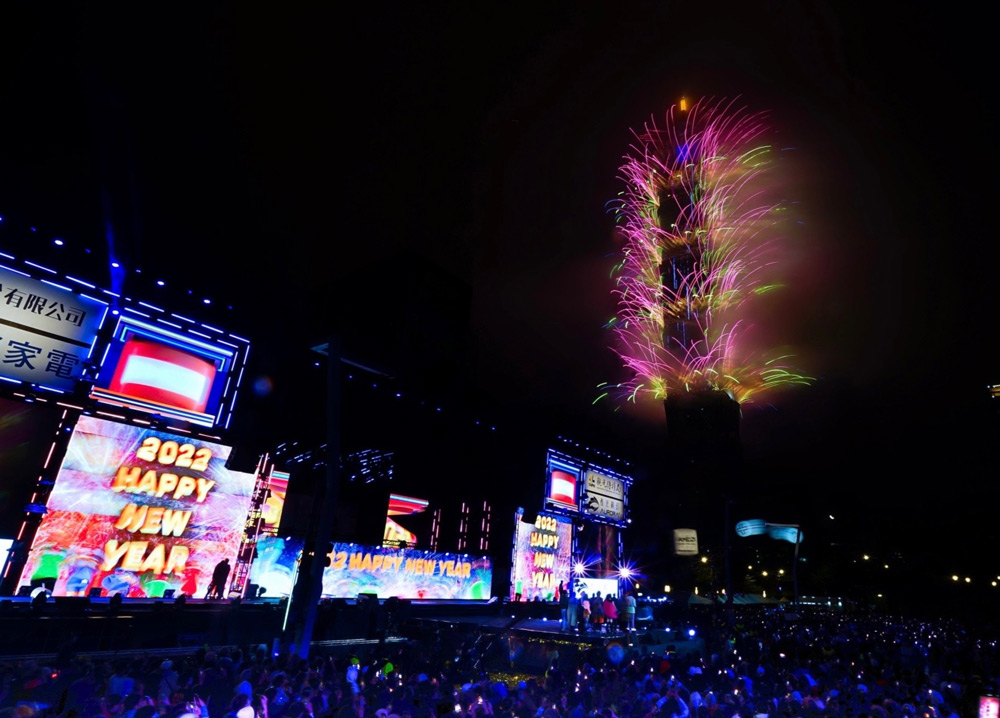 Fireworks and light effects illuminate the sky in the evening from Taipei 101, a landmark and skyscraper in the capital of Taiwan, as part of celebrations for the New Year. Photo: Taipei City Gov.

Taiwan's New Year's Eve fireworks display in Taipei, at one of the tallest buildings in the world, drew more than 1 million revellers, according to local media, as case numbers are relatively manageable.

Taipei Rapid Transit Corporation statistics showed that on Friday it served at least 1.57 million passengers. About 16,000 fireworks were used during a six-minute show, themed on well-being and a shared future, at the 509-metre tall Taipei 101 high-rise building. 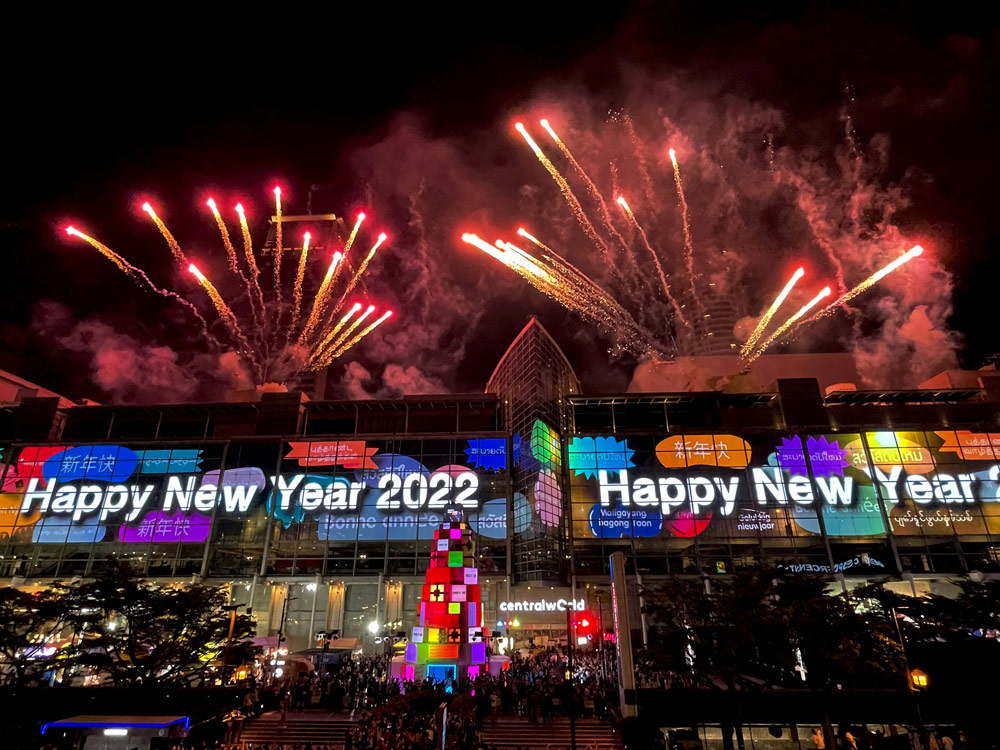 Meanwhile several cities in China cancelled firework displays and other large-scale festivities due to the pandemic, including Beijing and Wuhan.

New Year's Eve is not a particularly important holiday for the Chinese, as the lunar new year begins later, triggering mass travel, although restrictions are also likely to apply this year.

But in Bangkok, tens of thousands of locals and tourists welcomed the New Year in Khaosan Road, famed for its hostels and clubs. Silent until recently, it resembled a street party as visitors flocked to celebrate.

Attendees were able to drink, dance and party as in pre-pandemic times, after showing proof of vaccination, as Thailand's infection rate is relatively low, despite the Omicron variant, with some 3,000 new cases recorded daily.

The outgoing Mayor of New York Bill de Blasio (L) and his wife attend the Ball drop on New Year's Eve celebrations at Times Square. Only about 15,000 people with proof of vaccination and use of face masks are allowed to gather around Times Square. Photo: Niyi Fote/dpa.

In Dubai, the world's tallest building, the 828-metre-high Burj Khalifa, hosted a fireworks display complete with a light and laser show. It would take 26 hours, up to 1200 GMT on Saturday, for the entire globe to ring in the new year.

Next up the public would ring in the New Year in South America, including in Rio de Janeiro where celebrations have been scaled down, the US East Coast, California, Hawaii and finally the uninhabited islets of Baker Island and Howland Island back in the Pacific.

In New York, the traditional New Year's Eve party in Times Square was to take place again with spectators - but all visitors must be vaccinated against Covid-19.

As is the case every year, the celebration is to be broadcast live on television and online - including the traditional ball drop - the lowering of a glowing crystal ball. Stars such as rapper and actor LL Cool J are expected at the party.