Suspect in deadly Norway attack to be brought before judge

The suspect in a bow-and-arrow attack in the small Norwegian town of Kongsberg, which left five dead and two injured, will be brought before a custodial judge on Friday.

His lawyer said on Thursday evening that his client's mental state would be more closely examined by psychiatrists, raising the questions as to whether he could be considered criminally liable.

"The incidents in Kongsberg currently appear to be an act of terrorism," but the actual motive of the killer was not yet known, a statement by the security service of the Norwegian police said earlier on Thursday.

A public prosecutor later said that the 37-year-old Danish suspect man had provided a comprehensive statement and also given reasons for his actions, but she did not want to share the details with the public.

Norwegian police had said there were signs that the suspect in the attack had become radicalized after recently converting to Islam.

The security service is now investigating whether what happened could inspire others to commit serious acts of violence.

The man is suspected of attacking numerous people with several weapons, including a bow and arrow, in the southern town of Kongsberg on Wednesday night. 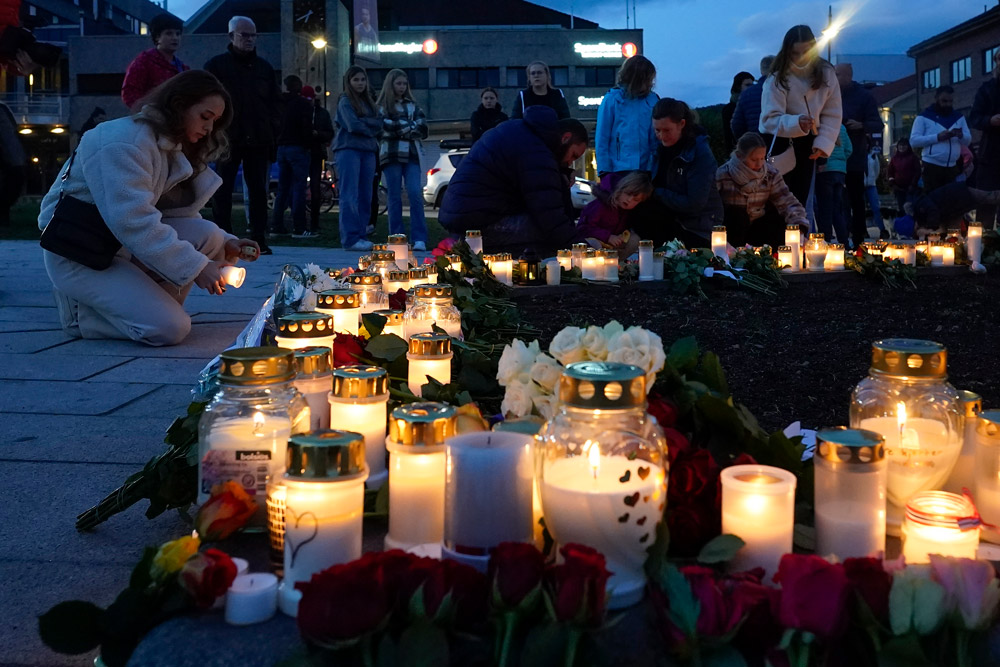 People light candles in memory of the victims of the attack in Kongsberg. Photo: Terje Bendiksby/dpa.

Four of the dead were women

Five people were killed and two injured, all between the ages of 50 and 70, police said. Four of the dead were women, one was a man. Of the two who were injured, one was a police officer shopping in a supermarket.

Police received the first report of the assailant moving through the city with a bow and arrow at 6:13 pm on Wednesday.

A police patrol spotted him five minutes later but he fired arrows towards the officers and initially managed to flee.

It is likely the victims were killed shortly afterwards, according to police spokesperson Ole Bredrup Saverud.

Officers detained the suspect half an hour after they had received the first emergency call, the police said.

The suspect is thought to have acted alone.

He is a resident of the town of Kongsberg in southern Norway, police said.

A prosecutor told broadcaster TV2 that the man had admitted to the acts and that he had previously been known to police. She said he had been in contact with the Norwegian health service on several occasions. It was unclear from her statements whether the suspect had been treated for mental health problems.

An old childhood friend of the detained man said in an interview to the online newspaper Nettavisen that he had already informed the police in 2017 that he considered his friend dangerous.

The attacks took place in several locations in central Kongsberg. On Thursday, the centre was largely cordoned off.

Bows and arrows are considered sports equipment rather than weapons in Norway and can be bought freely, although they may not be used for hunting.

The incident occurred on the eve of the inauguration of the new Prime Minister Jonas Gahr Store, who said he was shocked. "What we have had to hear from Kongsberg this evening testifies to the fact that a cruel and brutal act has been committed," he told NTB news agency late on Wednesday.

The attack did not affect the change in government. Store, the head of the Labour Party, took office on Thursday morning. He will head a minority government with the Centre Party.

The killings come 10 years after the country's worst terrorist attack, when 77 people were murdered by a right-wing extremist.

On July 22, 2011, Anders Behring Breivik detonated a car bomb in Oslo, killing eight people, before driving to the island of Utoya, where he opened fire on attendees of the annual summer camp held by the Labour party's youth organization, killing 69 people, mostly teenagers and young adults.