At least six people were killed in Beirut on Thursday in gunfire and clashes at a protest against a judge investigating last year's massive blast at the city's port.

The protest, at which 32 people were also injured according to the Health Ministry, drew followers of the pro-Iran Shiite Hezbollah movement and its allies. They were gathering at the Justice Palace when the gunfire erupted, sending people running for cover.

It took several hours after the violence started on Thursday morning for the army to slowly restore order. Tanks and soldiers were deployed on the streets that saw the worst of the mayhem.

"A relative calm is prevailing in the area and residents who left earlier are returning to their homes," a Lebanese army officer said.

The ground was strewn with broken glass, and several buildings were riddled with bullets.

Later Thursday, the army said it had arrested nine people, including a Syrian national, in connection with the unrest.

It is still unclear who was behind the gunfire.

Hezbollah and its ally Amal accused the Christian Lebanese Forces of attacking their followers.

"In front of the Palace of Justice in Beirut, participants were subjected to an armed attack by (members of) the Lebanese Forces Party, who deployed in the neighbourhoods and on the roofs of buildings. They practised direct sniping operations," the two groups said in a statement.

The Lebanese Forces rejected any responsibility for the incident, and instead condemned "the use of weapons, intimidation, violence, and force to overthrow the course of justice in the explosion of the port of Beirut." 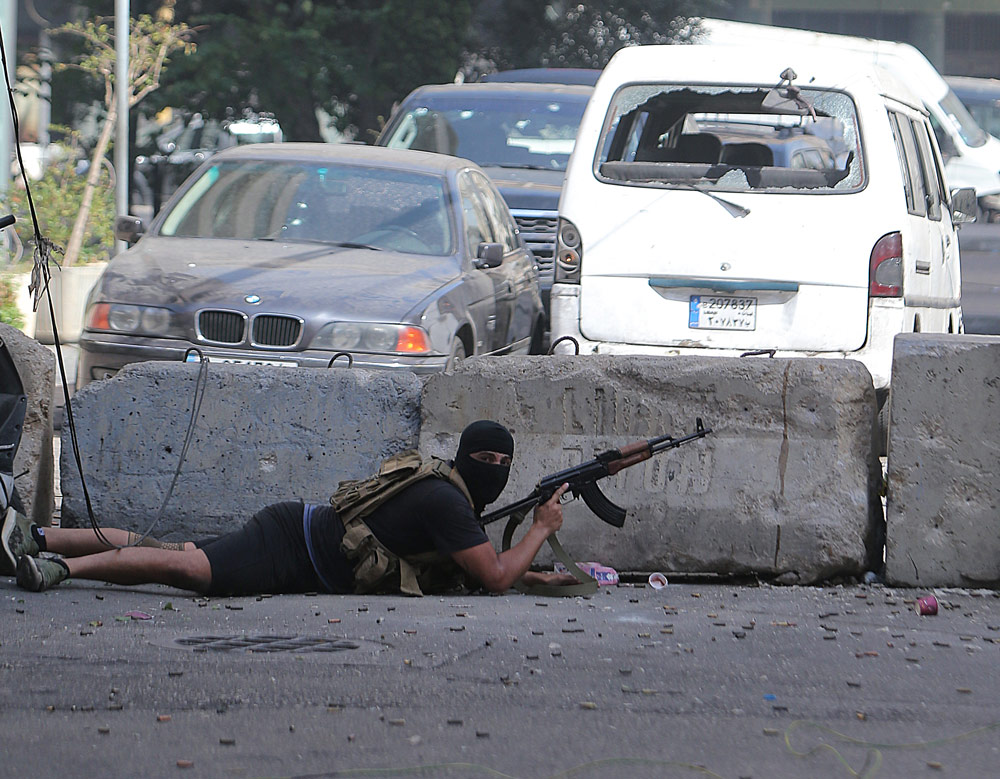 A gunman takes a position during clashes in the area of Tayouneh. Photo: Haitham Moussawi/dpa.

The head of the Lebanese Forces, Samir Geagea, called on the Lebanese government "to conduct full and thorough investigations."

Lebanese President Michel Aoun Thursday reassured his compatriots that the "clock will not be turned back," implicitly referring to Lebanon's 1975-90 war.

"It is unacceptable that weapons return to be the language of dialogue between the Lebanese factions because we all agreed to turn over this black page in our history," he said in a televised address.

At the heart of the tensions is a huge explosion at Beirut's port in August 2020, which killed over 200 people and literally tore a hole in the capital city.

Since the blast, the question of who should be held responsible has divided Lebanese society.

The Lebanese Forces have always backed Judge Tarek Bitar, who is leading a probe in the blast. They accuse Hezbollah of trying to silence Bitar.

Geagea on Wednesday asked the Lebanese government and the president not to bow to what he called "Hezbollah's intimidation."

A witness who saw the protest said the gunfire which set off the violence first came from a building in the Tayouneh neighbourhood, near a mostly Christian area of the city, and then wider clashes erupted.

Residents of Tayouneh were seen carrying their children and leaving their homes as gunfire intensified. Some school children were held in their classrooms to protect them.

Although it was rejected, the ministers' request put the investigation into the blast on hold for the second time in a month, provoking widespread frustration.

Khalil and Zeaiter are both Muslim Shiites and close to Hezbollah and Amal. They have led a fierce attack against Bitar and demanded he be replaced with a "transparent and honest judge."

Others accuse Hezbollah of seeking to influence the investigation.

Bitar is the second judge appointed to investigate the blast after Fadi Sawan was removed from the case in February.

Last year, Sawan filed charges against acting premier Hassan Diab and three former ministers for negligence. But he was eventually removed from the case after two of the ministers questioned his neutrality and requested his dismissal.

With Bitar in charge, the tensions are now coming to a head as he progresses in his investigation.

In July, he announced legal proceedings against a number of politicians and security chiefs, including Diab.

Thursday's violence coincided with a visit by US Undersecretary of State for Political Affairs, Victoria Nuland, who was holding talks with Lebanese officials.