In 2021, Spain received 31.1 million tourists, 62.7% below the result achieved in 2019, before the Covid-19 pandemic
Ten paranormal places that you can actually visit in Spain
Spending by foreign tourists in Spain close to pre-pandemic level
Finnair to cut 200 jobs and operate "with a smaller capacity"
The Nomad Today
February 4, 2022 at 5:22 PM
The Nomad Today
February 4, 2022 at 5:22 PM

The Spanish tourism sector is still a long way from its pre-pandemic success.

The latest official figures for international traveler arrivals and spending show a substantial improvement over 2020, the year everything went dark for tourism, but there is still a long way to go before the recovery is complete. 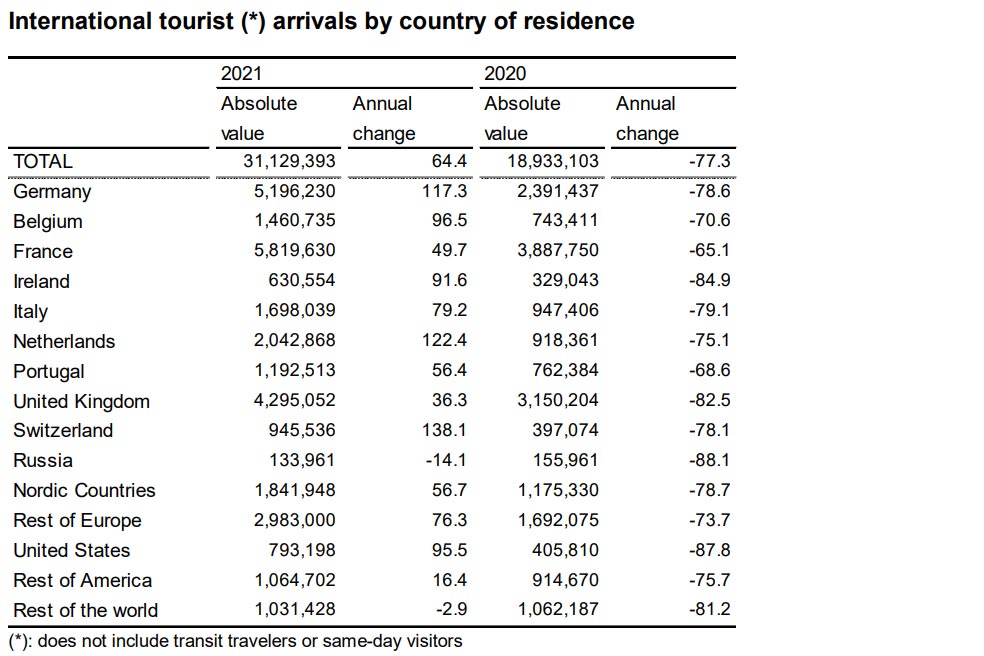 The Spanish National Institute of Statistics (INE) published this week the data corresponding to December and the whole of the year 2021.

In fact, the coronavirus has spoiled a sector that before pandemic represented more than 12.4% of Gross Domestic Product (GDP), according to the INE. In 2020, that percentage contracted to 5.5%, the lowest in the entire historical series.

Something similar has happened over the last two years with the money that international visitors leave in the country.

According to the INE, non-resident tourists who visited Spain during the year 2021 spent 34,8 billion euros, which represented an increase of 76% compared to 2020.

In 2021, the main countries of residence of tourists who visited Spain were France, Germany and the United Kingdom.

The arrival of tourists residing in France increased by 49.7%, that of those from Germany by 117.3% and that of those who came from the United Kingdom by 36.3%.

The Balearic Islands was the main region of destination, with 20.3% of the total number of tourists, followed by Catalonia (18.5%) and the Canary Islands (16.9%).