10 years of the historical snowfall in Mallorca

In February 2012, many towns around the archipelago, including Palma, woke up under several centimetres of snow.
Ten paranormal places that you can actually visit in Spain
Spending by foreign tourists in Spain close to pre-pandemic level
Finnair to cut 200 jobs and operate "with a smaller capacity"
Pablo Morilla
February 5, 2022 at 10:45 AM
Pablo Morilla
February 5, 2022 at 10:45 AM

Everybody in the Balearic Islands remember what happened on the 4th and 5th of February 2012. It was already 10 years ago when Palma, the capital, woke up under a usual snow cover. The beaches of this popular touristic destination turned white and snowmen appeared in many parts of this Mediterranean island.

February 2012 was “extremely cold” in many parts of Spain, like the Balearic Islands, according to the Spanish State Meteorological Agency (Aemet). Three cold waves hit Spain the 3rd, 8th and 11th of February, but it was the first one that brought snow to areas where people weren’t used to see it, like zones of the mentioned archipelago and the eastern area of the Cantabrian Sea coast.

The spectacle started during the night between the 3rd and the 4th of February. Meteorological predictions pointed out that an historical snowfall would hit the Balearic Islands, including coastal areas. And so it happened.

Many towns around the archipelago, including Palma, woke up on Saturday under several centimetres of snow. The lowest neighbourhoods registered only a small layer, while the highest zones received a generous amount of snow. Anyway, it left for some hours a rare and beautiful landscape. 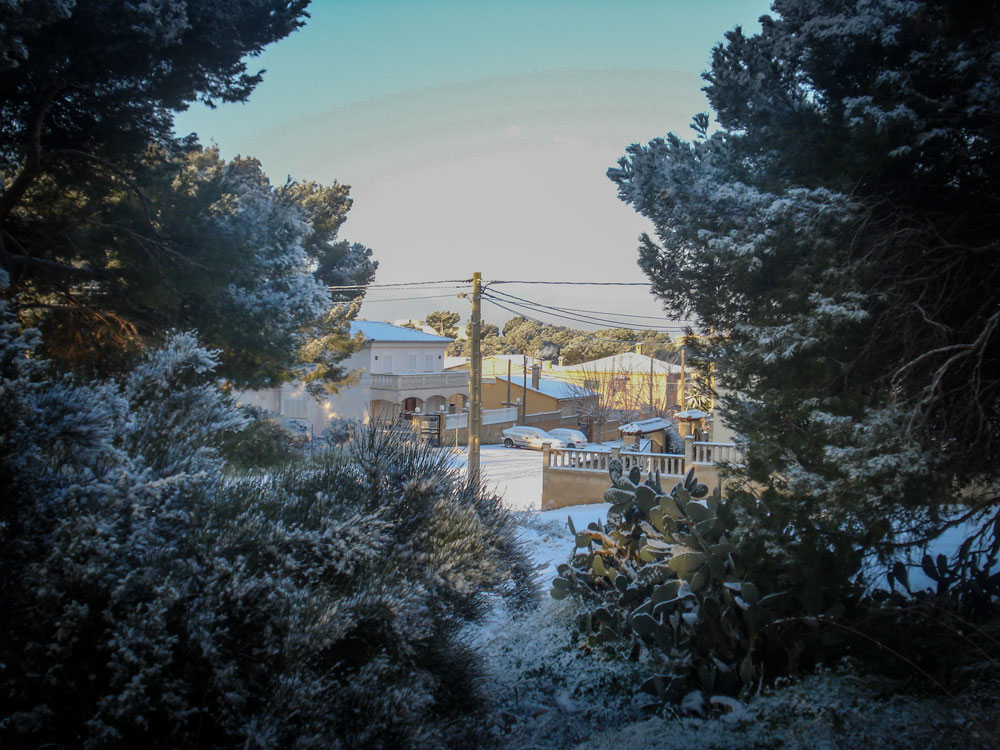 The snow started to melt soon and during the afternoon most of it was already gone. But on Sunday the sun rose and the snow appeared again in some parts of Mallorca, like s’Arenal, the holiday destination that many Germans choose in summer. Actually, there wasn’t any the previous day, even when some snowflakes were seen. During the afternoon, temperatures rose quickly, so the snow only stayed a few hours.

During these days, the minimum temperature in the Port of Palma was -0.1ºC on Saturday, but it was much colder in the Airport of Palma (-2.8ºC on Saturday and -4.4ºC on Sunday), according to Aemet’s data. The maximum on Saturday was also remarkable: less than 5ºC in both places.

Common in the highest peaks

The snow normally appears every winter in Mallorca, but the phenomenon is usually restricted to the mountains. The highest peaks are over 1.000 meters, so any cold wave arriving to the Balearic Islands bring subzero temperatures and snowflakes to the mountains.

Episodes like the one lived in 2012 are very rare. In 2005, a cold wave also affected Mallorca, but the snow melted almost as soon as it touched the ground in lower zones. But nothing compared to the so-called “any de sa neu” (year of the snow), 1956.

In February 1956, the Balearic Islands suffered a massive episode that lasted 18 days, remembered the researchers Miquel Grimalt and Pere Antoni Segura in a scholarly paper. There was snow absolutely everywhere, something that didn’t happen in 2012. In the centre of Mallorca, there was up to a metre of snow on the streets.

The most
10 years of the historical snowfall in Mallorca
Comments