Aleksandar Mitrovic's late winner saw Serbia seal their spot at the 2022 World Cup with an epic 2-1 victory over Portugal in Lisbon.

Portugal went ahead after just two minutes as Bernardo Silva capitalized on a defensive error to set up Renato Sanches, who opened the scoring with an unerring finish.

Dusan Tadic's deflected strike levelled the scores later in the first half, with Rui Patricio partially culpable for allowing the ball to cross the line.

Substitute Mitrovic completed a dramatic turnaround in the 90th minute as he headed in from Tadic's cross to send Serbia top of Group A and condemn Portugal and Cristiano Ronaldo to the play-offs.

Bernardo Silva said: "It was a terrible game from us. We managed to score the goal early, but from then on we stopped playing. I can't find much of an explanation for this, I'm missing the words.

"It was awful, we have to do much better because we have a play-off in March and we are going to do our best to qualify. But at home, with 65,000 fans, we had to do much better. I apologize." 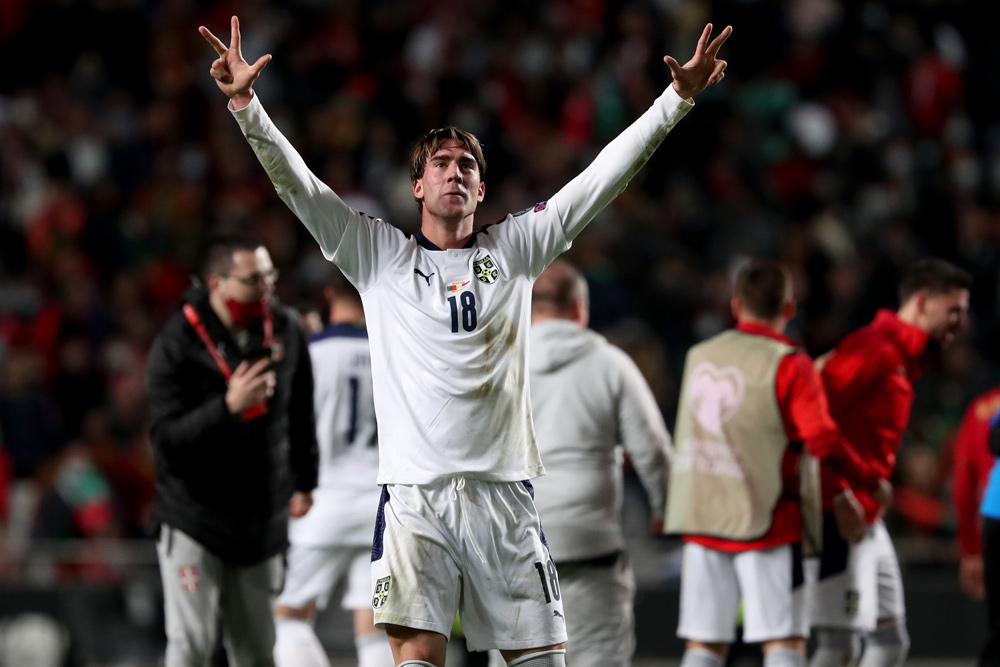 Serbia's Dusan Vlahovic celebrates at the end of the match. Photo: Pedro Fiuza/dpa.

Portugal enjoyed a dream start as Silva dispossessed Nemanja Gudelj before finding Sanches, who advanced into the area and rifled past Predrag Rajkovic.

Dusan Vlahovic thought he had equalized 10 minutes later as he struck towards the bottom-right corner, but his left-footed effort bounced off the post and away from danger.

Serbia did draw level in the 33rd minute when Tadic's fierce strike from the edge of the area took a deflection, causing Patricio to fumble into his own net.

The hosts came within inches of reclaiming the lead after the interval as Sanches' blocked effort was cleared against Rajkovic's back and rolled just wide.

Serbia appeared surprisingly conservative in the second half but Mitrovic, who headed wide only minutes before, grabbed a dramatic winning goal as he nodded in at the back post after Tadic's cross from the right flank.