According to official data, 19.3% of the homes transmitted by sale in August are new and 80.7% are used

Home sales increased 57.9% year-on-year in Spain in August, which may seem like one of the least successful months to buy or sell a house due to the summer holidays. Perhaps that is why the monthly evolution of sales registered a decrease of 0.7% compared to July.

The figures are part of the property sales statistics produced by the Spanish statistics office (INE).

According to official data, 19.3% of the homes transmitted by sale in August are new and 80.7% are used.

The number of sales operations on new homes increased by 40.9% compared to August 2020 and that of pre-owned homes by 62.6%.

In annual terms, the number of free-market homes transferred by sale increased by 58.7% and that of government-subsidized dwellings by 50.1%.

The regions (autonomous communities) with the highest number of property sales per 100,000 inhabitants are Comunidad Valenciana (183), La Rioja (181) and Andalusia (155). 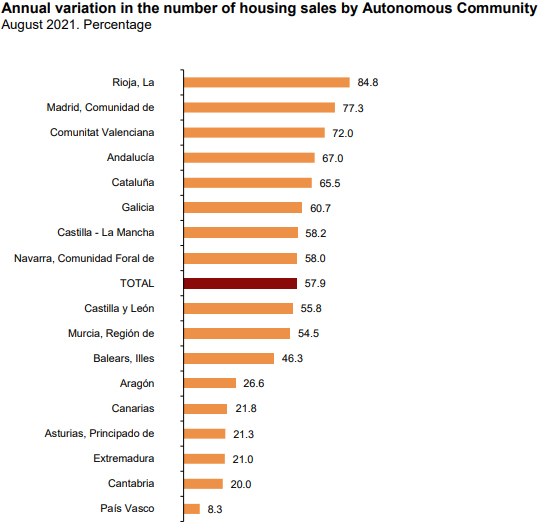 In absolute terms, the Autonomous Communities with the highest annual increases in the number of home sales in August were La Rioja (84.8%), Madrid (77.3%) and Comunidad Valenciana (72.0%).

The most
Home sales increase 57.9% year-on-year in Spain
Previous
Spain announces €250 monthly rental allowance for people aged 18-35
Next
The key aspects of the new Spanish housing law that make no one happy
Comments