Spain GDP rises by 2% with domestic consumption in decline

The consumption of Spanish families, one of the main drivers of the Spanish economy, contracted by 0.5% in 3Q.
Spain's 2021 net public debt issuance to be 25% lower than estimated
Nadia Calviño, European candidate to chair IMF's main advisory body
China's real estate giant Evergrande warns it could run out of money
Eurozone inflation rate climbs to highest point ever at 4.9%
The Nomad Today
October 29, 2021 at 10:29 AM
The Nomad Today
October 29, 2021 at 10:29 AM

The gross domestic product (GDP) of Spain grew by 2% in the third quarter of 2021 compared to the previous quarter. This growth rate is 9 tenths higher than that of the second quarter of 2021, which was 1.1%.

In year-on-year terms, the rebound was 2.7%, a rate that is "14.8 points lower" than that of the second quarter (17.5%), as emphasized by the National Institute of Statistics (INE) in a press release.

The National Accounts data advanced by the INE also show that the consumption of Spanish families, one of the main drivers of the Spanish economy, contracted by 0.5% in 3Q.

This decrease contrasts with the 4.7% increase in the previous quarter.

Public administration spending increased 0.1%, insufficient to compensate for the decline in household spending.

All in all, total spending on final consumption was down 0.3%. Gross capital formation or investments increased 2% in the third quarter (after falling 3.1% in the previous one). 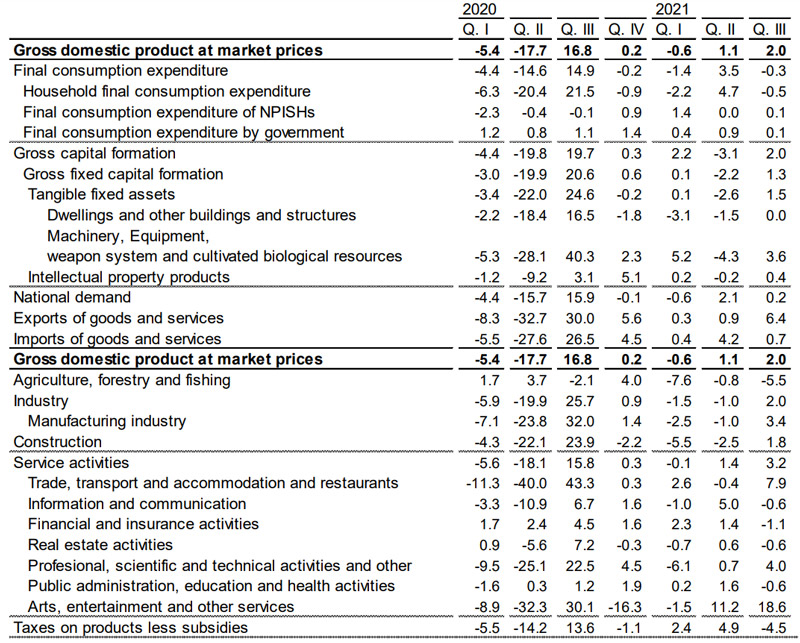 The national demand as a whole lost momentum and only grew by 0.2%, compared to 2.1% in the second quarter.

These figures, which suggest a slowdown in domestic demand, are known after the day before, the highest inflation record (5.5%) in 29 years was known.

The Spanish GDP for the third quarter of 2021 accounted for 301,432 million euros, which placed Spain as the 13th economy in the world ranking of quarterly GDP.

The most
Spain GDP rises by 2% with domestic consumption in decline
Previous
Facebook changes name to Meta, signaling emphasis on virtual reality
Next
German economy drags itself slowly out of pandemic in third quarter
Comments